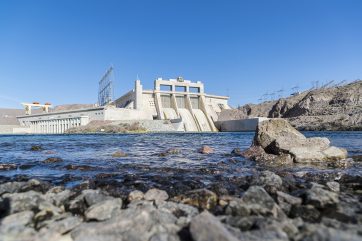 Perhaps the most famous dam on the Colorado River is the Hoover Dam, but that doesn’t mean that its smaller brother — the Davis Dam — doesn’t have a big impact on the surrounding community. The Davis Dam plays a major role in storing and distributing fresh water for the arid region, which is known for its lack of rainwater.

Many people who vacation on Lake Mohave do not realize that the lake is a reservoir that is situated between the Hoover Dam and the Davis Dam. Those who have rented a houseboat from Cottonwood Cove Resort and Marina will appreciate knowing a little bit more about the dam that has created their favorite freshwater spot in the desert.

Where is the Davis Dam Located?

The Davis Dam is situated on the Colorado River, in Laughlin, Nevada. It is approximately 67 miles away from the Hoover Dam, and 88 miles from the Park Dam, making it an integral component in the region’s water release strategy. In fact, the Davis Dam is directly responsible for the freshwater reservoir known to most people in the area as Lake Mohave. Not only does the dam provide the freshwater needed for the local people who live in the area, but it also has created a unique vacation spot in an otherwise dry and arid landscape.

It would be hard to miss the Davis Dam, as this dam rises more than 140 feet above the river. Its crest is 1,600 feet long, while the width along the top of the crest is about 50 feet. For many, this dam is less iconic than the nearby Hoover Dam, but it still plays an important role. Not only is it a dam that helps to create a reservoir of water, but it also has a power plant that provides the region with the necessary power.

When was the Davis Dam Constructed?

Famously, the Hoover Dam was constructed as part of the New Deal, and it helped to usher many Americans out of the Great Depression. The Davis Dam, however, was not constructed until several decades later, when it was realized that there needed to be another dam to help control the water release from the Hoover Dam.

The Davis Dam is owned and operated by the U.S. Bureau of Reclamation, and its construction was completed in 1951. Originally, it was called the Bullhead Dam, after a famous rock formation that was located near the spot that would house the dam. However, it was eventually renamed to the Davis Dam, after Arthur Powell Davis. He was the director of the Bureau of Reclamation from 1914 to 1923, and he is largely considered to be the mastermind behind the Hoover Dam project.

At the time of its construction, the Davis Dam was designed to re-regulate the water release from the Hoover Dam. In addition, the Davis Dam was also designed to help provide Mexico with fresh water from the Colorado River. Ultimately, this dam played a critical role in providing the people in the region with the water that they needed to survive. It helped to fuel economic development and community growth in the area.

What is the Davis Dam Used for Today?

The Davis Dam still works to control water release from the Hoover Dam, and it continues to provide residents in Arizona and Nevada with a hearty fresh drinking water supply.

In addition, the dam provides the region with hydroelectric power. The Davis Dam Hydroelectric Power Plant is located on the side of the dam that rests within the borders of Arizona.

Things to do Near the Davis Dam

Visitors will find that there is plenty to see and do near the Davis Dam. Here are a few ideas for travelers in the area to consider:

One of the most unique ways to enjoy the beauty of the mighty Colorado River and its reservoirs is to book a houseboat vacation. Cottonwood Cove Resort and Marina is the best marina for houseboat rentals on Lake Mohave. Travelers who want to spend their entire vacation on the water will love enjoying a spacious and luxurious houseboat for the week.

For more information on the Davis Dam and how to make the most out of your houseboat vacation, contact Cottonwood Cove Resort and Marina today.

POSTED IN: Houseboat Rentals, Things to do

Guest Services is an authorized concessioner of the National Park Service and state and public agencies and operates under special use permits with the USDA Forest Service. Guest Services is a Committed Equal Opportunity Service Provider.